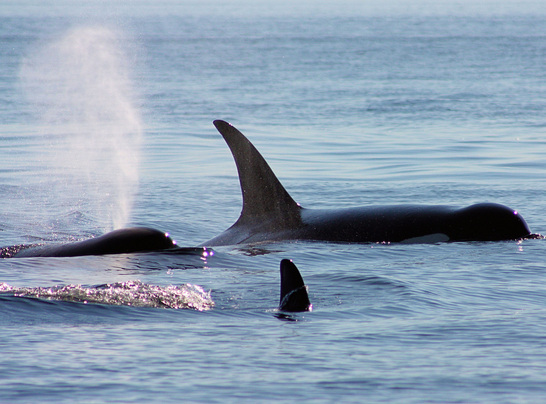 In 2012, work started on a feature-length documentary film dealing with the relationship of salmon and Southern Resident killer whales.
The film intends to examine the many factors involved in the health of the "Salish Sea" and surrounding environment and how it impacts the orcas.
We aim to tell the story through multiple perspectives and by talking to respected experts in the fields of fisheries, marine biology, conservation, native cultures and land management.

The purpose of the film is chiefly education and to support the conservation efforts in protecting the Southern Residents.

Our goal is to have the final film be shown via local television markets, film festivals and regional screenings.

Fragile Waters is sympathetic to all perspectives and emotional reactions to the various topics dealt with in the film. As a production unit, we strive to remain objective and balanced in our presentation of factual information or showcasing individuals, who speak their own opinions. Ultimately, the content of the final film will be decided on the basis of relevance and importance to the theme: Conservation of the Southern Resident killer whales.

Who are the "Southern Residents?"

When I started to conceptualize this project I did so solely in terms of the conservation status of the Southern Resident killer whales. My main questions were: How healthy are they? What threats do they face? And how can we save them? Through research, it quickly became apparent that not only were the orcas at risk, but the entire Eco system of the Salish Sea was endangered, too.

I'd spent seven years as a journalist, living in Western Washington. My experience with wild killer whales started in the summer of 2006, during a whale watching trip. During that initiation to their world, I was treated with sightings of nearly all of the residents in a single voyage.

I would go on similar trips five more times over the next five years. Always - without exception - we sighted orcas from J, K and L pods. In fact, it was far rarer to NOT see the Southern Residents during a late summer trip than to be surrounded by the large, graceful families of marine mammals.

Then I left Washington to pursue filmmaking in the Southeast.

For two years, from 2011 to 2013, I filmed projects involving sea turtles and manatees in Florida. Both projects (one, a documentary called "Journey Home," the other a web series called "Saving Sirenia: Manatees in Crisis") were self-funded and non-commercial. It was then - and remains now - more important to get the word out than it were to jump through hoops for distribution and a possible paycheck.

Endangered animals were dying and my projects could at least educate and inspire people to support on-going conservation efforts and the organizations trying to save them.

In the back of my mind I remained committed to the idea of doing a substantive film about the Puget Sound resident killer whales.

My cursory knowledge of the Southern Residents proved superficial soon after I began to research the unique killer whale population in-depth.

Now, as I begin the process of telling their story, I realize I have a lot of work ahead of me.

To tell a full and accurate account of the health of the “fish eaters of the Salish Sea,” I must start with the oldest known interaction with humans in Puget Sound. Native American tribes both revered and included salmon as integral parts of their diet. Today, that reverence plays out in ceremonies marking the beginning of runs throughout the Northwest.

It seems each tribe is linked with different species of salmon. The Nisqually celebrate the chum, while the Lummi honor Chinook.

It's factual to say that each tribe owed their survival to the respective type of salmon found in their area. Many totem poles place the salmon in a position of prominence, if not outright honor.

On the other hand, killer whales were rarely – if ever – hunted by native tribes. They were respected and likely somewhat feared due to exposure to transient orcas feeding on marine mammals in often times violent manner.

For the most part, the native people saw killer whales as kindred, sentient and spiritual beings. They may have intuitively known the highly-intelligent orcas had a culture and language of their own and looked at them on a different level than fish or even true whales, like the gray whale, which was hunted regularly by them.

By the time European settlers entered the picture, the relationship between Native Americans and orcas was solidified into one of co-existence. The “new” Americans came looking for possibilities of wealth and commercial exploitation. What they found instead was a different jackpot: salmon.

The hunger for wild salmon had grown in Western Europe since the Atlantic species of salmon entered the popular palette at the dawn of the industrial age. Even in pre-industrial Europe the taste for salmon had outpaced the technology for catching them.

Overfishing and emerging pollution dwindled salmon stocks around the United Kingdom by the early 1800s. “Luckily,” the untapped and seemingly endless supply of Pacific Northwest salmon was ripe for the picking. The confluence of high-yield fishing net development and a newly invented food preservation technique (canning) led to an onslaught of fisheries springing up, nearly overnight.

Some historians believe the salmon industry did more to settle and shape the Puget Sound region than any other influence.

The Southern and Northern Residents were in no danger of whaling but they were in danger of being seen as competitors for the salmon stocks. By the mid-1800s it became common practice to shoot foraging killer whales that “intruded” in commercial fishing areas. This practice would continue, well into the 20th century.

Though now protected, killer whales are still viewed as competing for a dwindling supply of wild salmon.

The reasons for the sharp decline in certain species of Pacific salmon vary. Certainly historical overfishing plays a role but so does the damming of spawning rivers, pollution, global climate change and changes in biodiversity.

Farmed fish offers up their own bag of detracting properties. High rates of water consumption, along with spiked levels of toxins and costly hatchery operational needs make the farmed alternative to “wild caught” salmon difficult to sustain.

So, the question remains; how do we protect the orcas and still supply the world with King salmon?